Menu
Work with us

There are 4 main objectives with a fire suppression system. 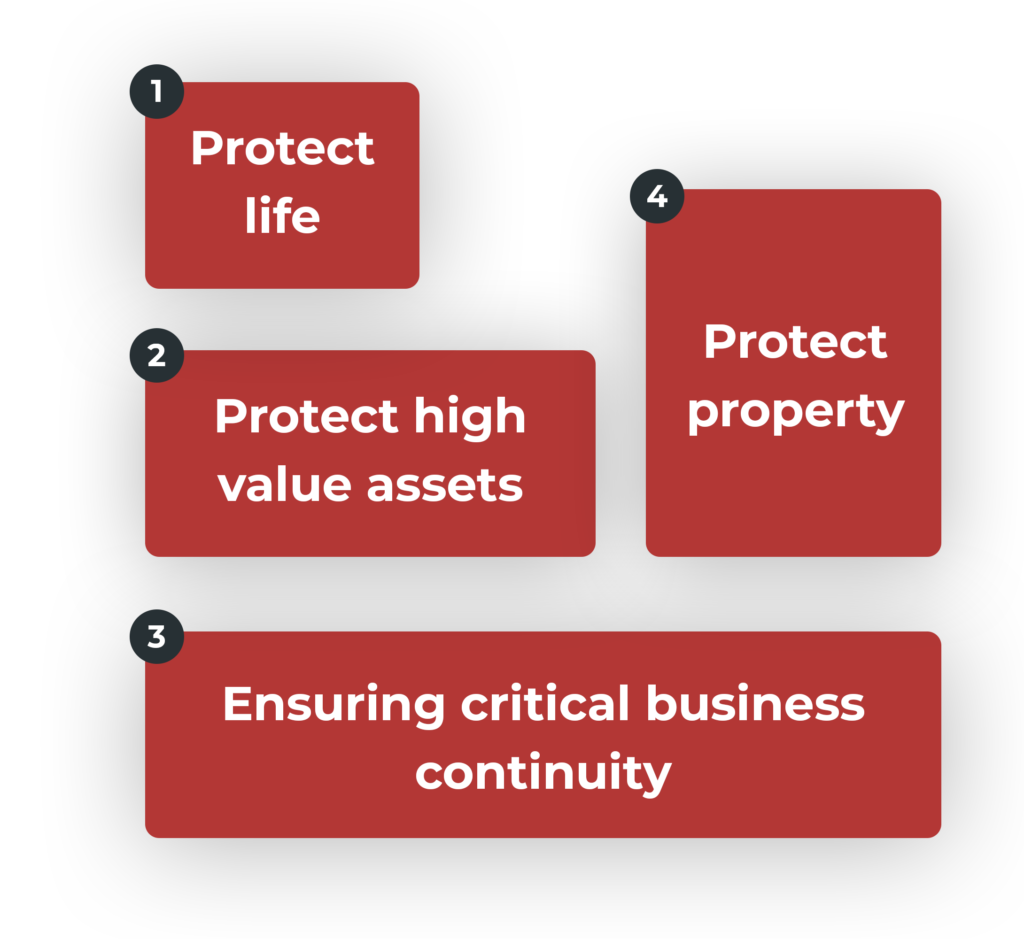 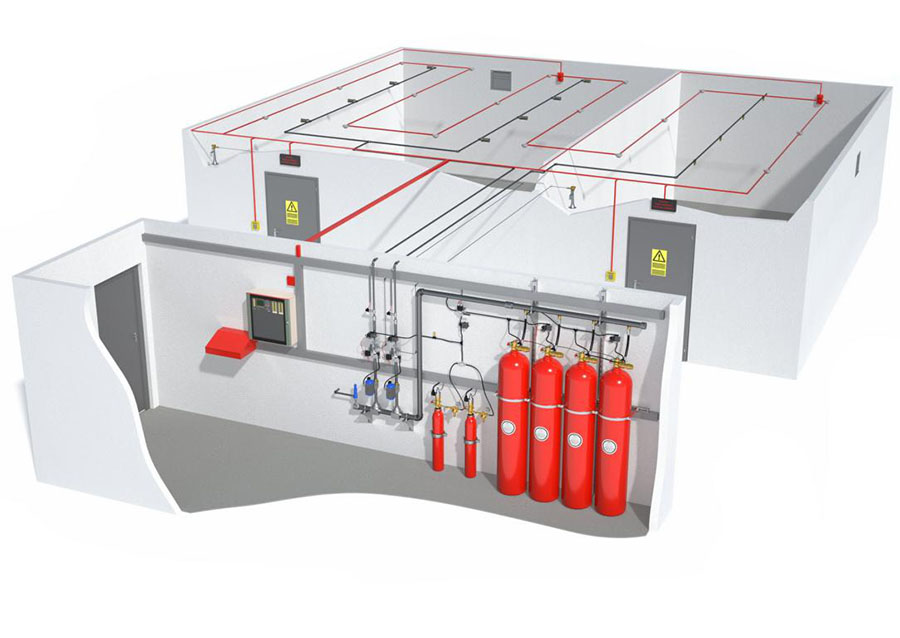 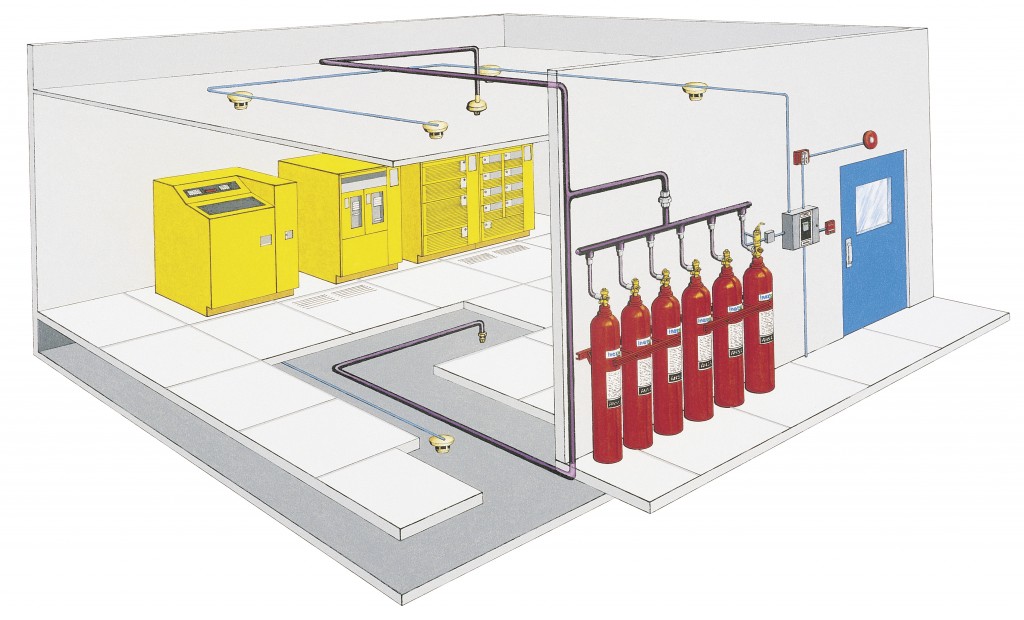 Armstrong Priestley’s inert gas fire suppression systems, such as IG55 or IG541, are colourless, odourless, non-corrosive, electrically non-conductive blends and are safe for life within occupied spaces, with a density approximately the same as that of air. Excellent visibility is maintained during discharge, allowing efficient evacuation of the risk. Composed of naturally occurring gases, these inert gasses have no negative effects on the ozone layer or global warming. Safe and very effective for any protected area.

Armstrong Priestley’s chemical gas fire suppression systems, such as NOVEC 1230 are environmentally friendly, odourless, colourless, non-conductive, do not produce residue and are safe for life within occupied spaces. The main advantage of chemical gas is the small amount of agent required to suppress a fire. Fewer cylinders are required resulting in one of the smallest footprints compared to most other fire suppressants. No residue is produced, avoiding costly clean up. These gases do not deplete stratospheric ozone, have minimal impact on the environment and also have an extremely low global warming potential (ODP)

Carbon Dioxide has been utilised in a wide variety of applications to fight fires.

It is generally used in area’s designated as unoccupied as the design concentrations used for fire suppression means it can be hazardous to people.

It has an advantage over other extinguishing gases as it can be used as total flood to protect area’s such as generator rooms and electrical switch rooms.

It can also be used for “local application” where it can be discharged directly on to a high risk area or process machinery such as printing presses and deep fat fryers.

Armstrong Priestley’s water mist systems optimise the quantity of water used through the distribution of very small droplets, achieving maximum cooling effect. Spray heads discharge water mist at high pressure. The tiny drops create a large effective cooling surface area and the high speed of the droplets allows the mist to penetrate hot fumes and reach the combustion area. Once in contact with hot bodies and gases the droplets become a vapour, absorbing the heat and creating a smothering effect that protects any adjoining risks.

Armstrong Priestley also offer Aerosol based Fire Suppression systems that contain the latest generation of FPC Compound, consisting mostly of Potassium salts with non-pyrotechnic materials. When activated, the FPC converts into a fast expanding, highly efficient and effective fire suppression condensed aerosol that is distributed evenly in the protected enclosure, using the momentum developed in the transformation process.

In comparison to the traditional fire extinguishing methods (gaseous or fire sprinkler systems), the fire is extinguished predominately by intruding the chemical chain reactions in the flame as per the tetrahedron of fire, without draining oxygen. Additionally, FirePro is compatible with conventional and addressable fire alarm systems.

If you’re wanting to learn more about the fire suppression systems that we offer, then watch this 3 minute video to do just that.

If you need our services or you would like to learn more to find out if these systems could be useful to you, just hit the button below to enquire with us.

Stay in the know with the latest news

Jamie Farrar rides from Liverpool to Leeds for Dementia UK

We are always looking for new members of staff throughout our entire workforce. Check out our job listings below.

We are dedicated to delivering quality every time and this is reflected in our track record and commitment to Third Party Certification. Armstrong Priestley maintains LPCB Level 4 Certification for commercial and industrial fire sprinkler systems and FIRAS Certification for Residential and Domestic fire sprinkler systems. This allows us to certificate all of our work whatever the size or complexity of the project and ensures that our clients only receive the best advice and compliant systems every time.

The ISO 9001:2015 certification covers our Leeds office only. However, our Maidstone, South Shields and Manchester offices all operate in accordance with the same Quality Management System.